The sea, especially the deep unknown, holds its mysterious nature. There is a fascination for the dimensions of water bodies and the secrets it holds. The power of a storm, the long horizon and the incomprehensible depth or underwater life, all these raise respect among most of us. Travelling on sea brings us to think about the sea. We look at the water and try to imagine how it looks like under us. We imagine how it would be going under the surface. The ferry travels through a map moving high above the bottom of the sea floor, sometimes shallow, sometimes deep. The passage in time generates stream of various data like water depth, speed, direction, and position. On the surface, there are shapes of islands and the coast line, drawn on the sea, the radar reports the distance to another vessels. The multitude of ship routes and passages that connect countries and cities together weave a vast invisible network of paths. The voyage provides lot of information, which normally can’t be seen or heard. 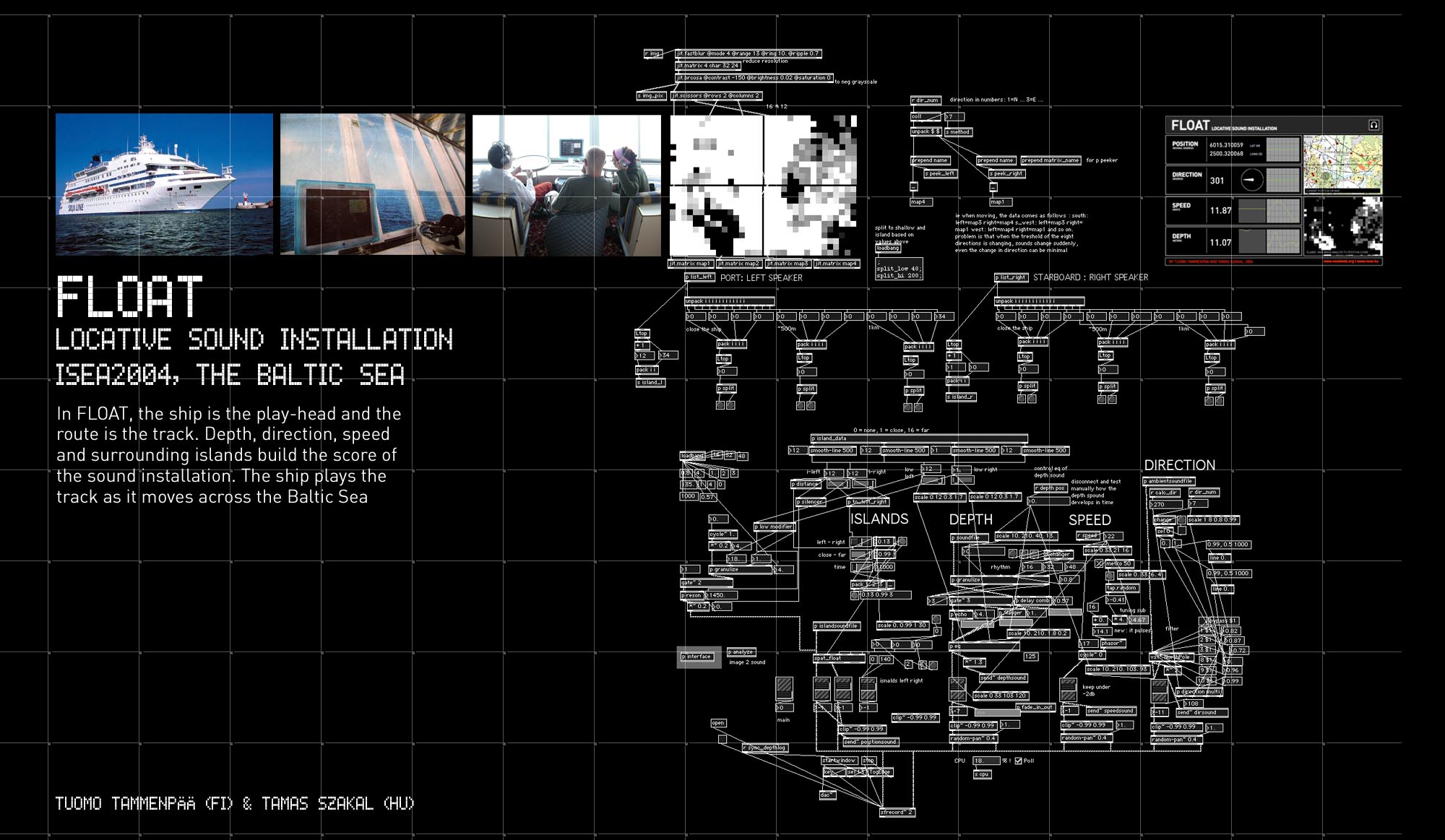 In FLOAT, the ship is the play-head and the route is the track. The surrounding islands build the score of the sound installation. Within a predefined framework the ship plays the track as it moves from on city to the other. Taking a ferry on the Baltic Sea is usually just transportation or entertainment on board. In either case, the sea, the location, the depth, the surroundings is insignificant. This sound installation makes all the invisible dimensions and the silent layers of data, audible. All streams of data: the GPS coordinates, distance to islands, depth, direction and speed are translated to sounds and sound controlling filters in real time. The result is a slowly developing soundscape that invites the traveler to listen to it frequently and to take a dose of the moment. We create an experience where the listener is aware of hearing the location in the middle of nowhere.

Float was presented within the framework of “Interfacing Sound” program module in ISEA2004, which took place on Silja Opera ocean cruiser August 15th – 17th (Helsinki-Mariehamn-Stockholm-Tallinn). The work was installed on the 10th floor bar with a wide view to the sea and to the archipelago from panoramic windows. The setup itself was simple: comfortable chairs, headphones, subwoofer+speakers, G4 mac running Max/MSP/Jitter and a flat screen. The visitors sat on the sofa, listened and looked out the windows or the screen visualization. In our proposal we intended to use the cruisers onboard navigation instruments to get data feed on ships position, depth and radar. This turned out to be security risk, so we had to use our own gps with depth feed coming from data table, based on gps coordinates and instead of radar our software analysed nautical charts (maps) from the region in real time. This was lot more time consuming but quite necessary for the simulation of the route as well. 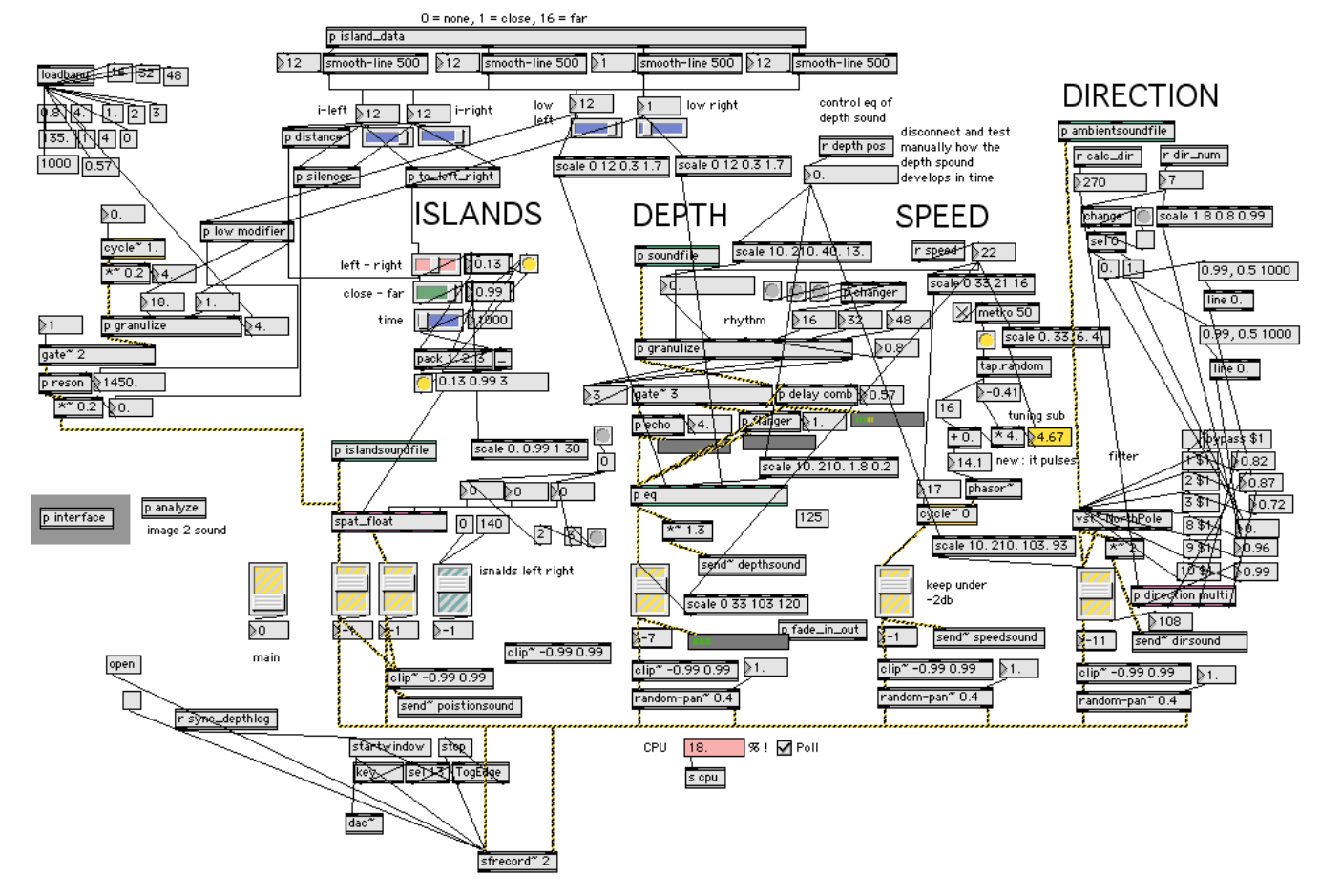 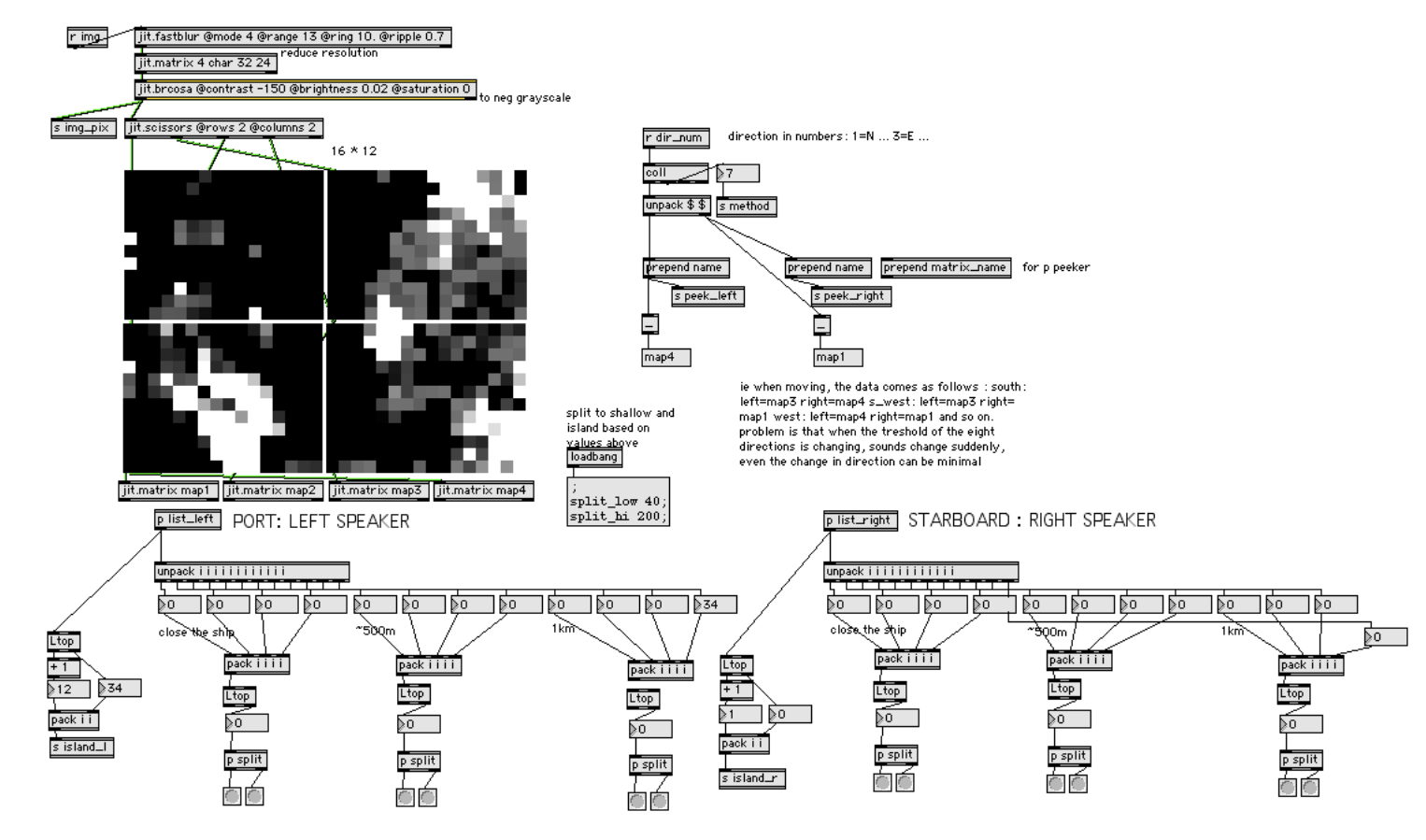 Each data flow is coupled with a certain kind of sound, which are composed in space. Surrounding islands – getting closer to the ferry – trigger high frequency ringing tones generated by granular-synthesized and overdriven oscillator. They are determined by distance to islands, which control the size of grains and gaps between grains. Very important aspect is to give these sounds a spatial feel. For the island-sounds we use modules that are able to pan between left and right, near and far respectively. Depth (for us the most fascinating parameter) drives and controls ever changing, never repeating rhythm patterns, consisting of a water sound sample which is played at very low rate and again granulised by the current depth value, but also modified by detected low water areas surrounding the ship. The sound of direction is one unique sample that is filtered by direction parameter. Speed is a simple low frequency sound wave, a little pulsating sub bass that gives pressure on ears while travelling. 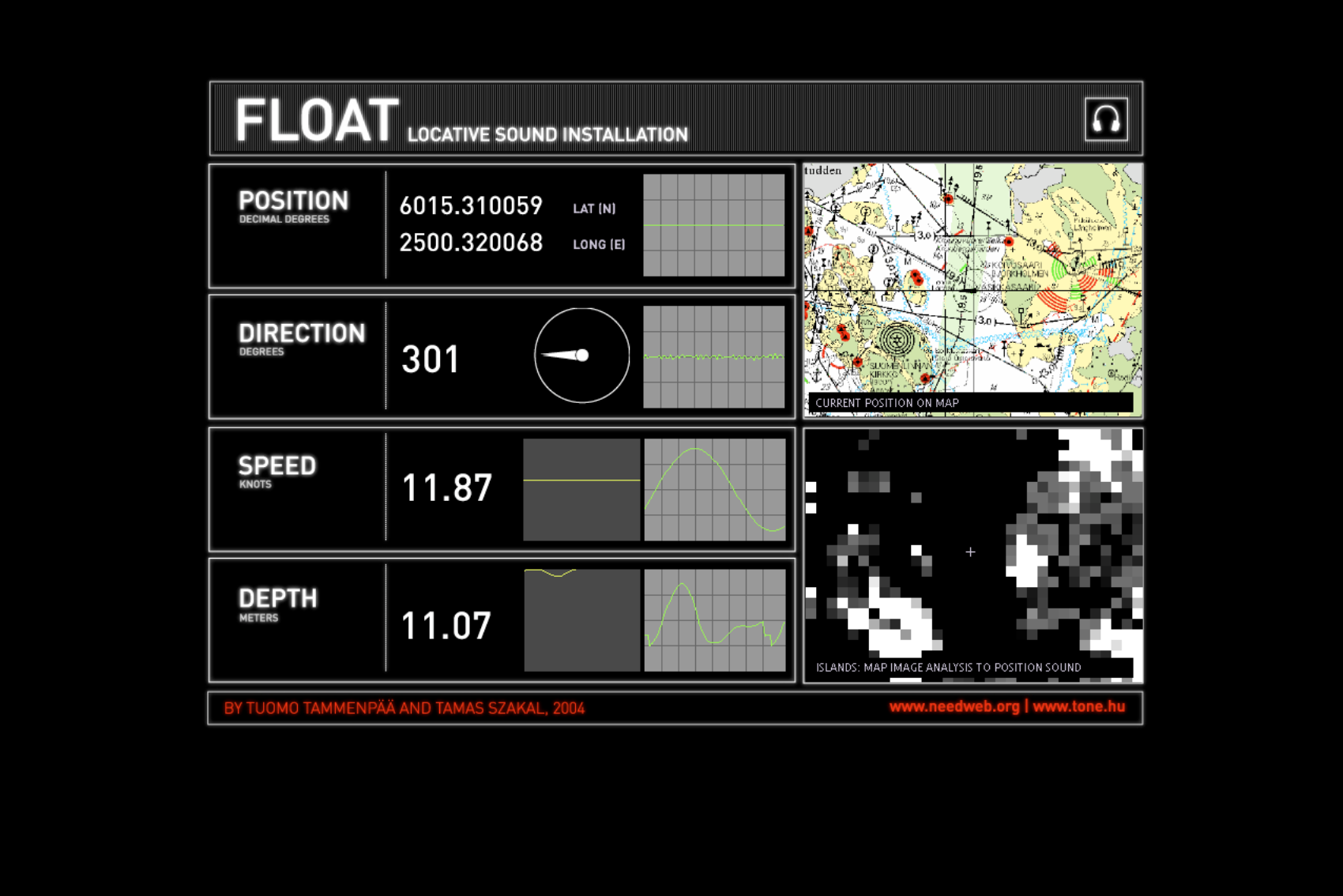 Since most of the time speed is constant and direction doesn’t change much, depth sound dominates the others on the open sea. At harbors and between islands the soundscape is unstable, varying and rich, while leaving diversified landscape and water bodies behind, it gets straight and meditative. There is an interconnection between many controlling parameters of the different sound elements, which results to concentrated, but not monotonous listening experience.

FLOAT process was 100% remote collaboration. We made the application, pre-planning, production and testing apart from each other, sharing documents and patches online. And few thousand lines of chat. Actually, we have met together only once, in Media Architecture Conference in Riga, May 2003, few months before we decided to collaborate for ISEA2004.